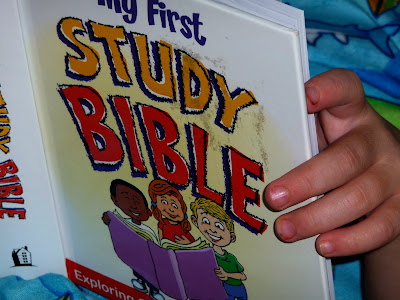 Nearly every night Rowan begs me to tell him a bedtime story. “Honey, I’m just not a storyteller. I’m more of a snuggler,” I tell him, which isn’t entirely true. After all, I tell stories here nearly every day. But not the kind of stories Rowan wants to hear, fantastical tales of good guys and bad guys, drama, dragons and giants.

I think that’s why the Bible appeals to him so much.

Rowan and I are reading the Old Testament together most nights before bed – a children’s version of the Bible, which frankly is challenging enough for me.

Rowan is transfixed by the stories. Some nights he even chooses the Bible over Harry Potter [why I even give him the choice of the Bible or Harry Potter is probably fodder for another blog post altogether].

The trouble is, you can’t read the Bible, especially the Old Testament, without it provoking 146 tricky questions. So every night we delve into Theology 101, Rowan and I.

He is particularly troubled by the story of the mothers in 1 Kings 3. “Why would the king cut the baby in half?” he asks, eyes wide. I explain the concept again and again: that King Solomon wasn’t really going to take his sword and cut a living baby in two. He was merely trying to trick the truth out of the two women, in order to discern who was the true mother.

The next morning, though, I hear Rowan ask Brad the questions again as he hunches over his bowl of Rice Krispies. I think he remembers who has the theology degree in the house.

The story of Abraham and Isaac also poses a difficult question. “Would you kill me if God told you to?” Rowan asks, interrupting me just as Abraham suspends the knife over his son. I hesitate. “Probably not,” I admit. “Abraham was very brave, and had a lot of faith in God to trust that his son would not be harmed. But I think I might be too afraid to have that much trust in God,” I tell Rowan.

He seems relieved by my answer, even when I remind him that God isn’t the kind of God who would really make me kill my own son.

“Why is God  so mean?” Rowan asks in the middle of some stories, like Job. “Why is God  so mad?” he inquires when we read stories of the Israelites wandering in the wilderness and their exile in Babylon.

I try to explain.

“In the old, old days, before Jesus, people used to give God animals to show how much they appreciated him as a way to thank him and honor him,” I tell Rowan. “But they kept disobeying God, and forgetting about him. And that made God mad and sad.”

I tell Rowan that later God sends us his son, Jesus, and Jesus becomes all the animals wrapped into one gift when he dies on the cross, which is why we don’t have to give God animals anymore.

I don’t mention the bloody parts – the animal sacrifices and the burnt offerings. But then we read 1 Kings 18, the story where Elijah’s sacrifice to God proves more powerful than King Ahab’s sacrifice to the false god Baal, and I’m forced to explain the history of sacrifice to Rowan.

There’s no avoiding the unsavory parts of the Bible, even in a children’s version.

The Old Testament is teaching Rowan and me the hard truth about sin. But it’s also illustrating why Jesus is such a necessary and bright light in our lives.

“We need Jesus,” I tell Rowan. “We can’t obey God all on our own; it’s too hard. We make so many mistakes.” Rowan nods. I think he understands.

Still, I’m relieved when I see we are close to completing the Old Testament readings. Matthew is on deck for tomorrow night. I will welcome Jesus with open arms.

We are considering the spiritual practice of parenting – what it means to prayerfully parent – with Ann Voskamp at Holy Experience this week. I wonder…does this flawed and sometimes laborious reading of the Old Testament with Rowan count as prayerful parenting? Have you ever read the Old Testament with a young child? What was your experience like?