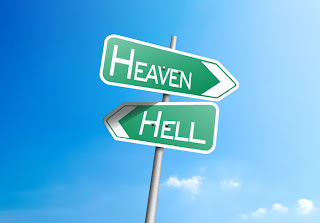 A few months ago Noah came up behind me as I sat at the computer. “Mommy?” he asked, hovering behind my left shoulder. “Mmmmm?” I answered, still typing. “Mommy, do Jewish people go to Hell?”

My first thought was why? Why do I always get these questions? Why doesn’t Divinity Degree Dad get the Hell questions? Why is The Waffler dealt all the religious wild cards?

My second thought was to volley the question right back at Brad. “Why don’t we wait till your father…” I stopped myself mid-sentence. I can’t always default to Mr. Divinity, right? I can’t be known as the Spiritual Sluggard forever, right?

“Well, honey, I really don’t know,” I began. “But to tell you the truth, I personally don’t think Jewish people are in Hell, just because they don’t believe Jesus is the son of God.”

I tackled the semantics first to buy some time. “Well, it’s not that Jewish people don’t believe Jesus existed,” I clarified. “But just that he isn’t the son of God.”

“But what about the Hell part?” Noah pressed again. The kid was relentless.

In the end, I don’t know that I gave Noah a Biblically sound answer. In the end, I don’t know if I gave him the right Christian answer. But I know I gave him the answer from my heart. I told Noah that I don’t believe all Jews burn in Hell because they don’t believe Jesus is the Messiah, but also that I don’t know who burns in Hell and who doesn’t, because it’s not for me, or him, to decide or know. The decision and the knowledge, I told Noah, is God’s alone.

A couple of weeks ago Brad mentioned an article he read on CNN.com entitled, “Is Judas in Heaven or Hell?”

“Well there’s a no-brainer,” I scoffed, tossing chopped yellow pepper into a bowl. “Out of anybody, I think we can be pretty sure that Judas is in Hell. He betrayed Jesus. You don’t get much worse than Judas.”

Oh. I hadn’t really thought about it that way.

This week I finished Rob Bell’s latest book, Love Wins. And of course, the question of Heaven and Hell — and who gets in and who doesn’t — is essentially what Bell’s book is about and what’s caused so much controversy in Christian circles.

I admit, Bell’s theology seems a little fuzzy in spots, and I’m certainly no theological powerhouse (as we’ve already established), but I don’t think the question is all that complicated, when it comes right down to it.

Except, that is, when you consider the Trinity – the belief that God, Jesus and the Holy Spirit are all one. While it’s hard to wrap my rational mind around the logistics of the Trinity, it seems to me that according to the Trinity, Jesus is God. So perhaps the verse “No one comes to the Father except through me” is not so narrow after all. In fact, perhaps it’s incredibly, lavishly broad.

“The questions may be interesting as an intellectual exercise, and it may be spiritually beneficial to ask these questions, but ultimately these aren’t questions we can reasonably answer, because we always have to defer to the sovereignty of God.”


That’s Divinity Dad’s answer. Now can you see why I like to defer to him?

So what do you think about this question of Heaven and Hell and who “gets in” and who doesn’t? Honestly I don’t write very often about controversial topics here, so this is pretty out there for me. But feel free to comment honestly; I’d love to hear your thoughts, too.

Hear It on Sunday, Use It on Monday: The "Yeah, But..."Faith
The Gift List