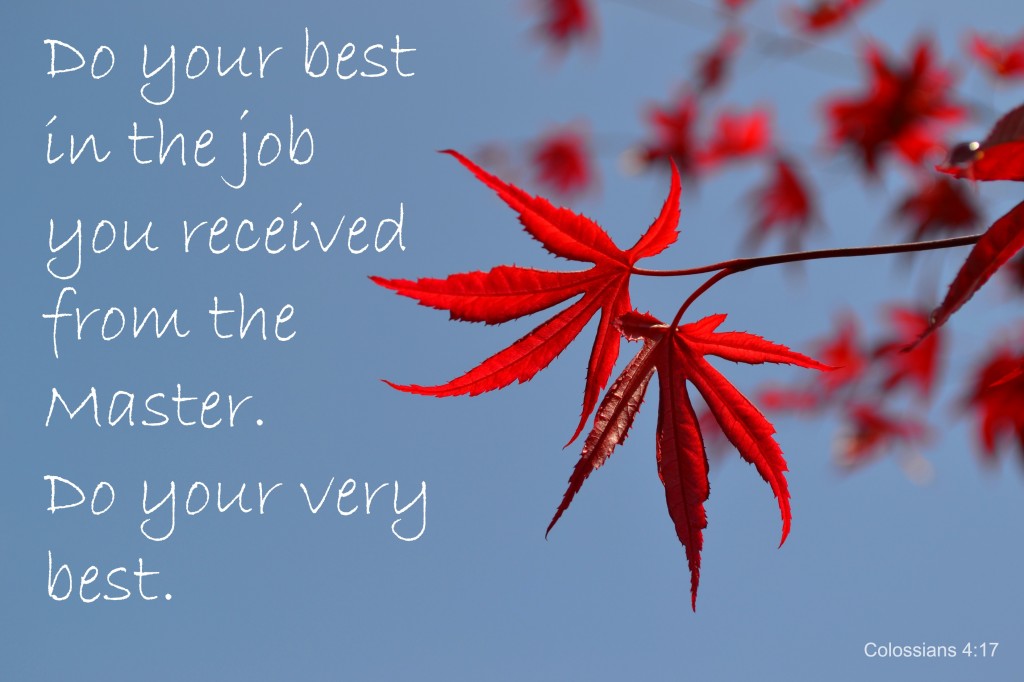 It began with a rejection.

A guest post I’d submitted to an online community I admire was rejected. This is standard, I realize, for the writing profession. Not every article, not every book, not every blog post will be accepted. But still. It hurts. Rejection always makes me doubt myself and my abilities. It always makes me feel less-than. And it always fuels the hot flames of comparison.

Turned out, though, the rejection itself wasn’t the real problem. The real issue was that I wanted to belong. I wanted to part of the “in crowd.”

You wouldn’t think there’d be an in-crowd in Christian blogging, would you? But there is. There’s an in-crowd everywhere – in every school, in every office, in every church, in every community. Like every in-crowd, if you’re part of it, you may not even realize it. But if you’re not part of the in-crowd, you know it.

If I belonged there, it would be enough, I thought to myself as I scrolled. I would be fulfilled. Satisfied. Content. Confident. Being a member of that group, that in-crowd, would fix everything.

I know this is baloney. Intellectually I know this isn’t how it works. Even if I were a member of that group, or that community, or that in-crowd, I’d still be clamoring for more. My head knows this. But my heart does not.

“Do your best in the job you received from the Master. Do your very best.” (Colossians 4:17)

Paul wrote that advice to a fellow named Archippus. I don’t know who Archippus was or what his job was, but it sounds to me like he might have been feeling a little down, a little frayed around the edges, a little defeated. It sounds perhaps like Archippus might have been clamoring for a little more; that perhaps he was straining against the job he’d received from the Master, wishing for a different, better job. Paul was reminding a disgruntled Archippus to focus on the job God gave him – not on someone else’s job, not on what everyone else was doing, but on the job given especially to him.

I made myself a picture with the words of that verse. I drove over to Hobby Lobby and bought a spool of red ribbon to match, and Brad fixed a strip of it to the back of the frame. When the glue dried, I hung the picture on a hook right next to my desk. I can see the words as I type. 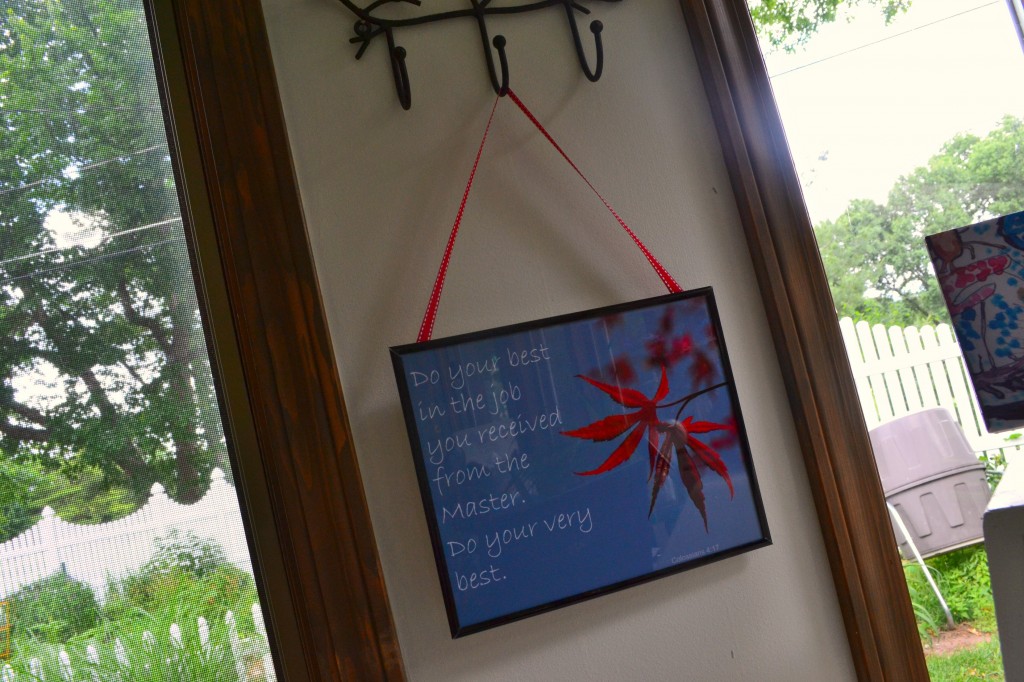 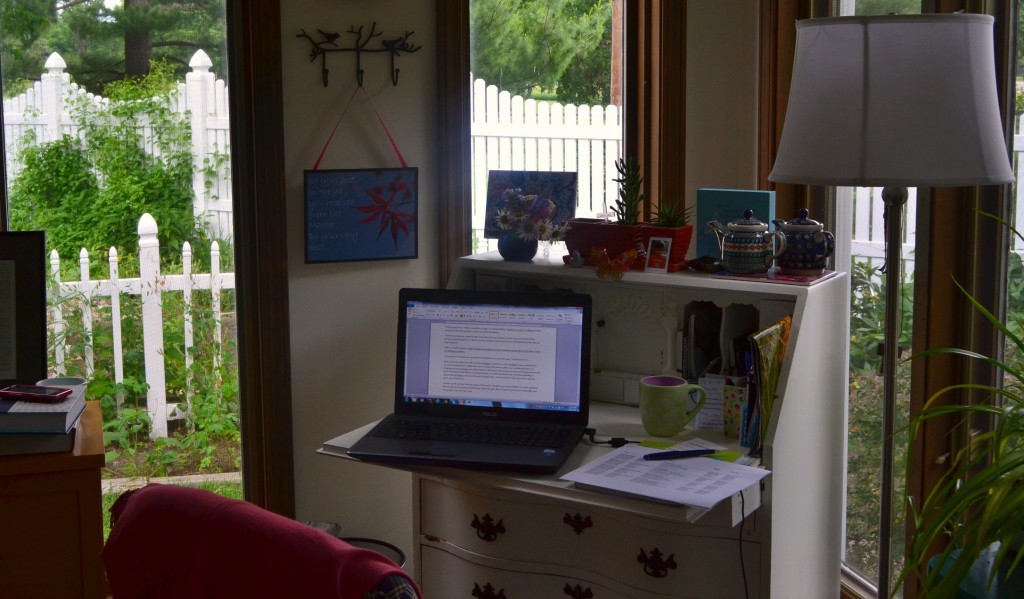 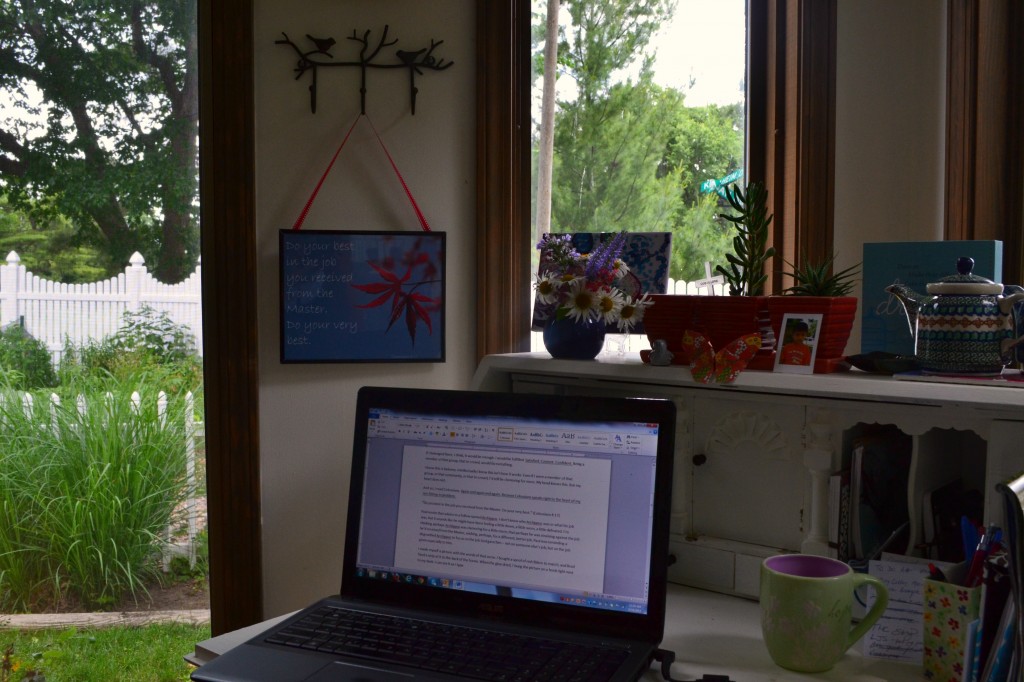 Every day, every hour that I’m at my desk, I come back to those words, repeating them like a prayer. Those words refocus my heart and my mind on my role, the one God has especially designed for me.

I think, if we’re honest, that we all yearn to be part of the in-crowd at one time or another. Maybe you’re lucky and you haven’t felt that desire since the eighth grade. Maybe, like me, you’re feeling it right now. Maybe you’re looking at those moms in the super-cute platform sandals and the perfectly flat-ironed hair, or those colleagues who seem to be climbing the ladder and in-like-flynn with the boss, and you’re thinking, I want that. I want to be there. I want to be one of those people.

Please, though, do yourself a favor. Give yourself this gift. Remind yourself that God has a job especially designed just for you and that your mission is to do that job to the very best of your ability. Every day. No matter what anyone else is doing or accomplishing. No matter what everyone else’s job is.

God has a job with your name on it.

Remind yourself of that truth again and again, every hour if you need to, until you believe it. Not only in your head, but in your heart.

When Your Kids Know What You Do for Work {or, When You live with Two Editors Under the Age of 10}
Hear It on Sunday, Use It on Monday: Want to Know God? Go Straight to the Source