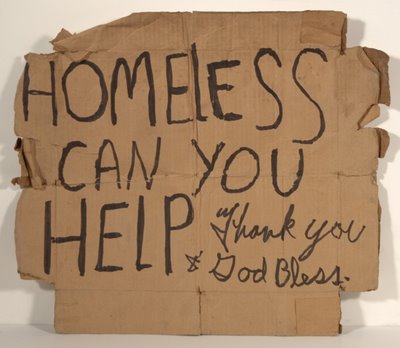 Two weeks ago I rolled down my mini-van window at the exit of SuperSaver’s parking lot and handed three dollars to the man with the cardboard sign and the dilapidated back pack. When the light turned green, my son Rowan and I continued on with our Saturday morning errands. At our next stop, a different man stood at the corner of Barnes and Noble. This time I drove past without stopping.

“I can’t give money to everyone, you know,” I snapped over my shoulder. “I already gave money. I’ve done enough for one day.”

“Well that sounds greedy to me,” Rowan replied. “Especially because I know you have money in your wallet.”

Although I thought of a few choice words to retort, I didn’t say anything more to Rowan. But I did fume all the way home. The reason I was so angry, of course, was that I knew he’d made a good point.

I’d considered circling back to the Barnes and Noble parking lot and handing three more crumpled bills out the window, but I’d dismissed the thought. I was busy. I had other errands to run; I didn’t have time for another homeless man.

Plus, I reasoned, it’s not like I’d done nothing. After all, I’d given to one homeless man. I’d already done enough.

I realize dispensing dollar bills on street corners may not be the most efficient outreach strategy. My point here is not to debate how to best care for our city’s homeless population,  but to illustrate another issue altogether. You see, my problem that day wasn’t my inaction, per se, but my attitude.

My “I’ve done enough” attitude was a red flag — a sign I had, as James warned, let the world’s values corrupt me.

The world tells me the man on the corner is a drunk or an addict or just plain lazy, someone not worthy of my attention, my compassion or my money.

The world tells me he’s made bad choices and deserves his lot.

The world tells me not to bother, because he’ll spend my three dollars on Jack Daniels or meth anyway.

The world tells me that if I’ve already done something, then I’m good; I’ve done “my part;” I’ve done enough.

But God tells me something radically different.

God tells me it doesn’t matter who I think is worthy of my attention, my compassion or my money. He tells me to care for those in need, period — without judgment and without assurance that the money will be spent in an appropriate way.

God tells me I don’t need to know for sure whether the homeless many will make good use of my money or not.

God tells me I am not to judge.

God tells me that those who are in need are, in fact, my problem.

God tells me to care for the needy first and myself last.

I’m sure this won’t be the last time I pass by a homeless man and look the other way, because the fact is, God’s message of compassion and self-sacrifice is difficult to follow consistently. But I also know that when I ignore his message, I allow the worst of religion — judgment and exclusivity — to overpower the best in me.

What about you? Have you ever thought to yourself, “I’ve done enough”?

This post originally ran last month in the Lincoln Journal Star. I’m reposting it today because I can’t seem to string together a single compelling sentence these days!

How to Be Done with Not Enough
On Valentine's Day, Let's Plant Seeds of Love {#veggiesforAfrica}