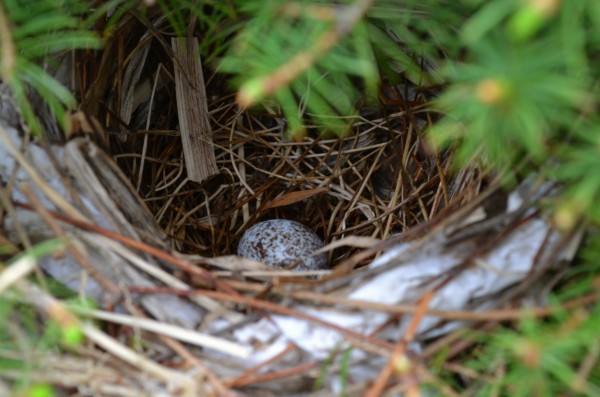 I heard him first before I saw him. Three chirps in a row, again and again, the same three chirps I’d heard the afternoon before, when I spotted the robin fledgling fluttering helter-skelter onto the branch of the honey locust tree. I’d sat on the front step and watched for mama bird to arrive with a fat worm, but despite his incessant chirping, three times in a row, again and again, I never saw her come.

The next morning, early, when the sun was still slanting golden through the branches of the white pine, I heard him through the open living room window, insistent, persistent, along with a rustling of dead leaves. I walked out the front door in my plaid robe and bare feet, across the dewy grass, bending to look beneath the spirea and the boxwood. Finally I spotted the fledgling deep in the window well, fluttering nervously among the dry oak leaves, chirping his three chirps. Brad donned a thick pair of utility gloves, reached in, cupped the speckled robin gently in two palms and set him on the flagstone in the front yard.

We watched the robin for two hours from the living room window, our faces peering over the back of the couch, peeking around the fuchsia bougainvillea in the window box, careful to stay hidden in case mama bird was watching. He didn’t move but an inch or two from the flagstone, still chirping while the dew dried on the grass and the sun rose over the tops of the trees. We Googled and then Googled some more, keeping an eye out for mother robin. There were several candidates, all with oozing worms glistening from their beaks, but none belonged to our baby bird. Or if they did, they did not acknowledge him.

Brad dug up worms from the garden. We arranged them, first on a Frisbee, and then later moved them onto the lid of a plastic cottage cheese container, sliding it onto the grass a few feet from the bird. Our baby took three frantic hops in the opposite direction when he saw us coming. When the first round of worms dried up, untouched, we replaced them with a fresh supply, but the bird never got within a few feet of the lid.

Around mid-day I ran up to my neighbor Karna’s house, the concrete hot under my bare feet. She’s into birds. She would know what to do, I was sure of it. “Leave him be,” she advised, shaking her head. “It’s best to let nature take its course.”

I wasn’t satisfied with that answer. Brad and I prepared a nest in a large Rubbermaid container, filling it with fountain grass and leaves, a twig on which to perch. But I went back to Google, unsure, and was dissuaded by what I read.

“It might take weeks before he’s ready, and it says we’ll have to feed him every hour, from sun-up to sun-down,” I told Brad as we stood side-by-side in the backyard, the hot afternoon air still. “We’ll have to keep him in the house, and what about the dog, and what if he doesn’t eat, and how will we get him to learn to fend for himself?”

We left the leaves and grass in it, but slid the Rubbermaid container back into the garage.

The fledgling grew quiet around three or four that afternoon. He’d made it over to the bee balm and stood beneath the spiky, scarlet blooms in the partial shade. I crept out every twenty minutes or so to look at him, bending over the garden, my palms on my knees. I watched as his one eye closed. He stood still now. He didn’t chirp.

Around five, Brad and I watched from our perch on the couch as a mother robin, a worm in her beak, balanced on the white picket just above the bee balm. It looked as if she were watching him, and Brad and I held our breath and spoke in whispers, watching, waiting. After ten minutes, she flew away toward the neighbor’s eave across the street, plump worm dangling.

At six I stopped short as I walked through the living room, past the glass front door where the sun beamed hot onto the wood floor. Our baby was in the street, round and plump, still standing, covered in flies. He tried to shake them loose, but, too weak to manage even that, tipped forward, his tiny beak tapping the asphalt. He righted himself, took half a faltering step, tipped forward again.

Brad donned the thick utility gloves, shooed the flies away, cupped the bird gentle between his palms and placed him in the Rubbermaid container in the garage. We slid the lid on partway. I crouched on my knees, elbows in the sharp grit, and watched through the opaque plastic as the tiny body shuddered up and down, up and down.

I wish I had a happy ending for you. Truth be told, I expected a happy ending. Maybe I’ve watched too many Meg Ryan movies, but I expected everything to work out somehow. I assumed the mother bird would show, or the baby would learn to eat our worms from the cottage cheese lid, or that God would swoop in on that hot June afternoon and make it all better. Until that bird was tucked face down, wings splayed, in the Rubbermaid container with the lid pull over it half-way, I had hope, hope that everything would somehow work out.

But it didn’t.The fledgling died in the Rubbermaid container in our garage while I was out at a speaking event. When I pulled the mini-van into the driveway that night, my headlights lit upon the container, sitting empty next to the trash bin. The bird had died not long after I’d left, Brad said. He’d felt relieved, he admitted, and I realized, in that moment when my headlights had flashed onto the empty container, I had felt relief too.

Later though, I felt angry. For days afterward I referred to the fledgling as “that stupid bird.” “Why didn’t that stupid bird just eat the worms we put out for him?” I lamented to Brad. “Why didn’t he do something?” I blamed the bird; Rowan blamed me. “You were lazy,” my son accused me. “You didn’t want to take care of him because you were lazy.” He was right, in a way. Laziness had been part of it. But like a lot of stories, it was more complicated than that.

Sometimes I feel obligated as a “Christian writer” to make this space a place of hope and joy and peace. I want to offer stories of redemption and beauty, stories that illuminate God among us, stories with happy endings. I don’t want to be the big downer, serving up tales of depression and lament. I don’t want to be the one who welcomes you here, and then offers you a story filled with the dismal and the grotesque.

But nature doesn’t work that way. And neither does life or faith or even God, at least while we spend our time here on this green earth. People suffer. Bad things happen. Mothers abandon their young. Babies die. Humans make the wrong decisions and then regret them later.

“Abundance and destitution are two facets of the one face of God,” writes Christian Wiman in My Bright Abyss, “and to be spiritually alive in the fullest sense is to recall one when we are standing squarely in the midst of the other.”

“Christ is a shard of glass in the gut,” Wiman continues. “Christ is God crying I am here, and here not only in what exalts and completes and uplifts you, but here in what appalls, offends and degrades you, here in what activates and exacerbates all that you would call not-God.”

I would call the day the baby bird died a not-God day. But in that I would be wrong. It was ugly, macabre and revolting. It was depressing and hopeless. But God was still there, even in the offensive, the appalling. He was beneath the bee balm, next to those fluffy, fly-infested feathers. He was in the stifling Rubbermaid container on the gritty, cement floor of a garage. He was next to me as I crouched on bent knees, peering through the opaque, crying over a stupid bird.

From Our House to Yours
Weekend One Word: Return