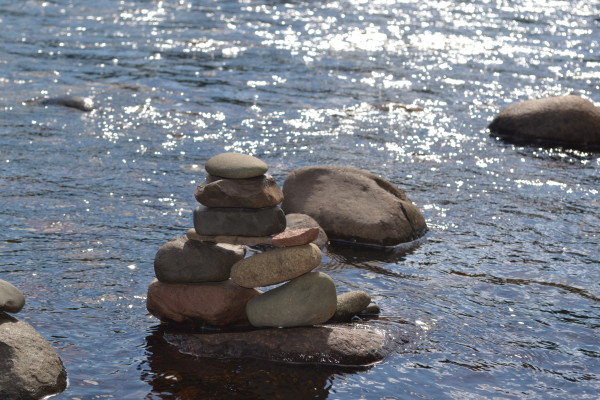 Katy Payne, the acoustic biologist interviewed by On Being host Krista Tippett, talked about the problem of poaching in Africa. Tens of thousands of elephants are killed every year for their prized tusks, which are extremely valuable in black market ivory trading. But she also pointed out something I didn’t know: sometimes these poachers are the native Africans themselves who are driven by extreme poverty to poach.

“Clearly poaching is something you are against,” observed Tippett, speaking to Payne, “and yet you’re always realizing that it’s often a correlate of poverty or of local uprisings, and so it’s not so simple to divide the world into good guys and bad guys.”

These observations about the bigger issue behind the problem of poaching got me thinking about how easy it is to divide the world into good guys and bad guys, especially when we don’t consider the bigger picture.

Think, for instance, about the looting that sometimes follows a highly charged racial incident, like when Mike Brown was killed in Ferguson, Missouri, last summer. I admit, I struggled to understand why some African Americans and others seemed to retaliate against the local business owners — many of whom were people of color themselves. But to blame the problem on “thugs,” a term casually tossed around by many of us when situations like these occur, is, I think, to miss the much bigger picture.

Columbia University psychology professor Tory Higgins says that incidents such as the Ferguson riots typically occur when people feel ineffective and unvalued. “There is a long period prior to the riot of feeling that you’re not in control of your own life. It may either be financial, like unemployment or a low-paying job, or political,” says Higgins. “They basically don’t feel respected or that they’re making a difference.”

Black people in America have experienced this lack of control, this sense of unimportance and ineffectiveness and less-than-ness for centuries. People of color have not benefitted from the same socioeconomic, educational and employment opportunities enjoyed by white people. And if you are a black person living in 21st-century America, you have experienced overt racism, period. No person of color escapes the impact of racism unscathed, including our President of the United States.

“There’s no black male my age, who’s a professional, who hasn’t come out of a restaurant and is waiting for their car and somebody didn’t hand them their car keys,” said President Obama in a 2014 People magazine interview, adding that, yes, it’s happened to him in the past.

This is an example of a subtler form of racism, but overt bias and hatred are obviously pervasive in America as well. And the fact is, when you suffer from both the subtle and overt forms of racism day in and day out, year after year after year, it takes a toll. Resentment builds. Anger simmers. And then it erupts.

You might assume all this has absolutely nothing to do with faith or religion, but I disagree. Jesus, it seems to me, was a big-picture kind of Messiah. Sure, he was concerned about the specific sins of individuals. “Go and sin no more,” he told the woman accused of adultery. But he was even more concerned about the bigger picture, the pervasive, overarching problems of sin that affect society as a whole.

Jesus urged the Pharisees in particular – those who saw themselves above and removed from the problems of society – to pull back from zeroing in on the sins of one particular woman and instead to broaden their lens to consider and acknowledge how their own sins might be part of the larger problem, too: “Let the one who has never sinned throw the first stone.”

Jesus’ point: none of us is innocent. We are all part of the bigger problem. We all sin. We can’t point a finger at someone else unless we take a hard look at ourselves first.

Yes, looting and rioting, like poaching, is terrible and criminal. But just like Katy Payne is able to see how the larger problems of poverty and injustice are connected to the crime of poaching in Africa, we need to understand how the history of institutionalized racism is playing out right here, right now in 21st-century America.

It’s time to look at the bigger picture. It’s time to stop blaming and pointing our fingers, yammering about “thugs” and “those people” and “them.” It’s time to broaden our lenses, lay down our stones and own that we all play a role in the problems perpetuated by racism.

Why I'm Not Cool with My 96% White Church