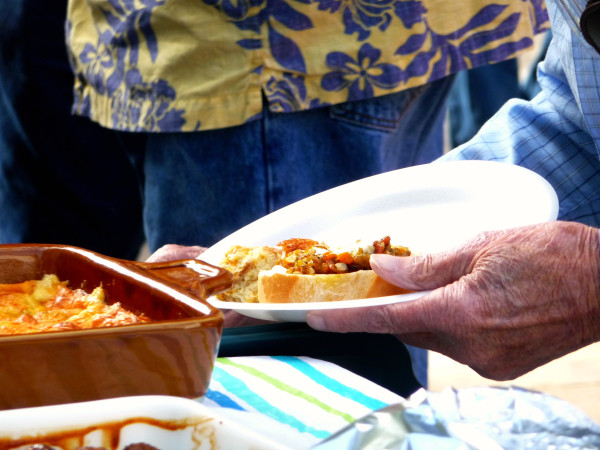 Last month I wrote a post here about the church’s role in confronting racism. As a member of the Evangelical Lutheran Church in America (ELCA), which is 96% white, I was critical of both my own complacency and that of my white Christian brothers and sisters regarding the problem of racism in this country. As I expected, the post generated some heated comments (mostly on Facebook when I shared it there). However one response in particular caught my attention.

“Complaining about a problem without offering a solution is called whining,” the commenter wrote, quoting Teddy Roosevelt. “Doing is better than talking. Talk is cheap,” he added.

I bristled when I read that response. After all, I am a writer. Writing is what I “do,” and I believe that dialogue is an important first step in acknowledging and addressing a problem. Once I simmered down, though, I realized the commenter was right.

A couple of weeks ago my husband, our two boys, and I waited in line, paper plates in hand, at a “Soul Food Feast” hosted by a local African Methodist Episcopal church in honor of Black History Month. I held my plate out over each steaming pan as candied yams, collard greens, fried chicken, green beans, macaroni and cheese, and corn bread were piled high. My ten-year-old son followed one step behind me, shaking his head and murmuring, “No thank you” to each spoonful held out to his empty plate.

“He’s really picky,” I explained sheepishly to the woman behind the pan of yams. She nodded, smiling, and then leaned forward to speak to the woman standing at the end of the table. “Give him a double helping of macaroni and cheese. He doesn’t want anything else,” she said.

Though the women were perfectly gracious, it was an awkward moment. Nothing broadcasts “We don’t exactly fit in” like your white kid refusing to eat pretty much all the soul food at the Soul Food Feast.

We sat down at a half-empty table occupied by two people, one at either end. The older gentleman immediately engaged Brad in conversation. “So, what do you think about the Syrian situation?” I heard him ask my husband. Grateful I didn’t have to navigate that landmine, I introduced myself to the woman sitting next to me.

She eyed Rowan’s plate, eyebrows raised. “Is that all he’s going to eat?” she asked. I nodded, cringing again, and then proceeded to barrage her with 106 small-talky questions. “Do you have kids?” “What do you do for work?” “Are you a member of this church?” “Do you have any fun plans for the rest of your Sunday?” She was personable, but not exactly talkative, and as I prattled on, I realized she was either, one: a bonafide introvert, or two:  silently bemoaning the fact that, of all the people on God’s green earth, she got stuck with the chatty white lady who wouldn’t let her eat her fried chicken in peace. The less she said, the more animated I became, because that’s what I do when I’m nervous and uncomfortable: I talk very enthusiastically and energetically in a voice pitched one octave higher than usual.

The truth is, the whole interaction was a little awkward. Not that the people weren’t gracious and hospitable – they were – but simply that it all felt a little uncomfortable.

But here’s the thing: awkwardness is inevitable when you step out of your comfortable place and into an unfamiliar one, among people who are different from you and who have different customs and rituals. You will likely make mistakes. You might say the wrong thing. Your child might turn his nose up at the food offered to him, in spite of the elbow you nudge into his ribs. You will pull a chair up to a table of people you don’t know and who don’t look like you and perhaps don’t share your same traditions, and you will make stilted small talk or sweat through interminable pauses in the conversation. If you’re like me, you will be extra cheerful, but beneath that chipper exterior, you will feel nervous and a little bit out of place.

But this is precisely why “doing” is important, in spite of the inevitable awkwardness. Talk is good, and I believe there is a time and a place for it. But talk is also easy because it allows us to keep uncomfortable issues at arm’s length. Talking about racism gives us the false sense that we are involved and “doing something.” Actually stepping into a new and unfamiliar situation, on the other hand, illustrates in a very real way what we have failed, or refused, to see.

I can talk, or write, all day about how I, as a white woman, am a member of and benefit from the dominant culture. But the fact is, though I’ve lived a racially segregated life for 45 years, until I stepped into that church basement with all my awkwardness and discomfort, I’d never truly thought about what that means, why that is or why I should do anything about it. That afternoon I felt my white-ness in a way I rarely do, and although it was a little bit uncomfortable, it also showed me exactly where and how I need to change and grow in a way that merely talking or writing about “confronting racism” never will.

Talk isn’t always cheap; dialogue is an important and necessary first step. But when it comes to something as imperative as eradicating our country of the institutionalized racism that has prevailed for nearly 400 years, we would do well to heed John’s advice: “Let us not love with words or speech, but with actions and in truth.”

In the Face of Grief and Anger, Tend Your Space
Why I'm Not Cool with My 96% White Church