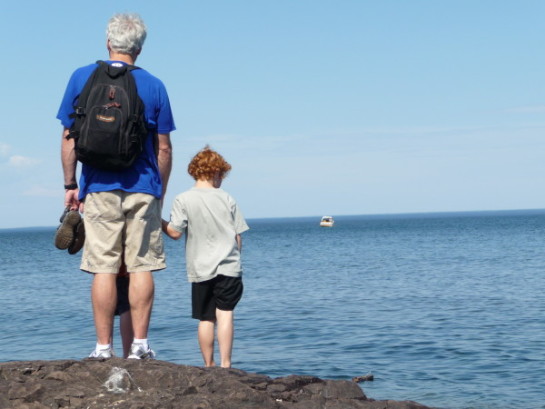 Last year I received an email from my sister’s father-in-law, Gary, who told me his sister was dying. She’d been away from church for a long time, but as she neared the end of her life, she had expressed the desire to see a priest. The only problem was, she was afraid and ashamed. She’d made some big mistakes in her life, and now she feared it was too late. She was afraid she couldn’t possibly be forgiven.

Gary was planning to visit his sister, but he didn’t know what to say to her. “How do I convince her that it’s not too late?” he asked me in his email.

Gary’s question scared me. It felt too big, too important. His sister was literally on her deathbed, expressing regret for some of the choices she’d made in her life. She felt ashamed and hopeless, too afraid to confess to a priest. What could I possibly say that would make a difference?

I flipped through my Bible, hoping my eyes would land on the perfect verse. When that failed, I Googled, “What to say to a person on their deathbed,” but none of the search results seemed suitable for this particular situation.

And then I remembered the prodigal son.

The parable tells the story of the younger of two sons, who took his share of the family inheritance early, left home, and then squandered the money on reckless living. Desperate and destitute, the son finally decided to return home to beg his father’s forgiveness. During the long journey home the son rehearsed his confession.

However, when he finally arrived in his neighborhood, but before he made it even halfway up the driveway, his father ran out to greet him with a kiss and an embrace. The rebellious son had his prepared confession ready to go, but before he could utter even a single word, his father welcome him with open arms.

The son was not required to list his sins and make a proper repentance before being allowed back into the fold. Instead, he was instantly received with love, no strings attached. In fact, when the son finally did recite his prepared confession, his father didn’t even acknowledge it. Instead, he commanded his servant to put a ring on his son’s finger, dress him in the finest robe and shoes, and prepare the fattest calf for a welcome-home party.

His beloved son had returned. He had been lost and found, and in the end, that was all that mattered.

In my email to Gary, I urged him to remind his sister about the story of the prodigal son. “Better yet,” I told him, “read the parable aloud to her. The story itself says everything she needs to know about God.” I emphasized to Gary that the verbal confession was actually the least important part of the story. It was the son’s turning around, his return, that led to the father’s rejoicing.

Several months after I sent the email about the prodigal son to Gary, he told me he’d had the opportunity to talk with his sister, and that she had agreed to meet with a priest. “She was frail and scared to death,” Gary said, but she spoke with the priest for over an hour, and at the end of her confession, the priest anointed her and told her she was in a state of grace. Less than one week later, she died a peaceful death at home.

The truth is, none of us is any different from Gary’s sister; we are all prodigal sons and daughters. We make mistakes large and small; we carry regret, shame, and fear; we wonder how God could love us, flawed as we are.

It took Gary’s sister her entire life to return to her father. She made a lot of poor choices and a lot of mistakes along the way. But her past didn’t matter one iota to God. He patiently waited for her all that time; he never gave up on her. And when, in the very last days of her life, she finally turned back to him, he met her, accepted her, and received her with nothing but the deepest love and the most compassionate grace.

Being in relationship with us is God’s deepest joy and desire. That’s what matters most to him. He waits for us with arms wide open, and he rejoices when we fall into his loving embrace, found again.