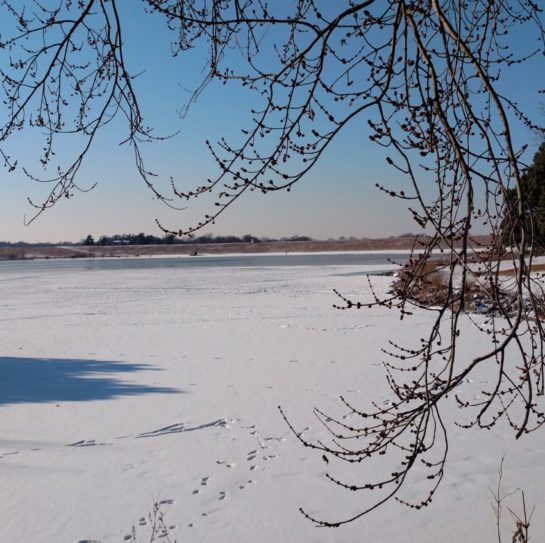 My son Noah and I walked Josie around Holmes Lake last weekend. It was above freezing for the first time in days, but when we stepped out of the car and trudged toward the path, the wind blew hard from the south, straight into our faces. It was cold, but we were there, and Josie was already sniffing eagerly, so we decided to go the distance.

Noah and I didn’t talk much – it was too cold for that — but when Josie stopped to sniff the trunk of a silver maple perched on the shore, I observed out loud that the tree already had its buds.

“It’s seems a little early for that, don’t you think?” I asked Noah, as I stared at the reddish buds dipping and bobbing in the wind above my head. After all, it’s not even mid-January, right? How in the world would those tender buds survive at least another month and a half of Nebraska’s bitter chill?

Noah, who has loved trees ever since he could talk, informed me that many species put out multiple rounds of buds – up to six cycles, in fact, depending on the type of tree and the year. If it’s too early in the season and the buds freeze, the tree simply puts out another batch, and another and another, repeating the process until the circumstances are right for the buds to survive and flourish.

I thought about that silver maple tree and its premature buds for a while, because, truth be told, it reminded me a little bit of myself. How many times have I steamrolled forward, and, in my eagerness, excitement, and drive to produce, put something out into the world that wasn’t quite ready, a bud that was too weak to survive and thrive?

How many times have I let the need to produce and achieve be the boss of me, propelling me to keep churning out more, even when I and my idea weren’t ready?

Come to think of it, I did exactly that this week. I’m working on a proposal for a new book idea, and I’m so excited and passionate about this idea, I want to thrust it into the hands of the publishing board right this very minute. I admit, I also feel pressure, from both the industry and myself, to produce something new.

However, my agent gently reminded me that the proposal isn’t quite ready; we’re not there yet. More work needs to be done, more preparation, to ensure that this proposal is solid enough to survive the vetting process. Unlike the silver maple on the edge of Holmes Lake that gets six opportunities to produce buds that will bloom, I only get one chance to pitch this particular book idea to my publisher.

As I’ve mentioned here before, I’m Type A. My drive to achieve is hardwired into me. Like the silver maple, I am driven to produce. But slowly I am learning that neither my personality nor industry expectations should determine my productivity. Just because I’m “driven,” and just because society encourages relentless productivity, doesn’t mean I actually need to produce on a particular timetable.

Unlike the silver maple, I get to choose the circumstances that will give my bud the best chance to bloom.