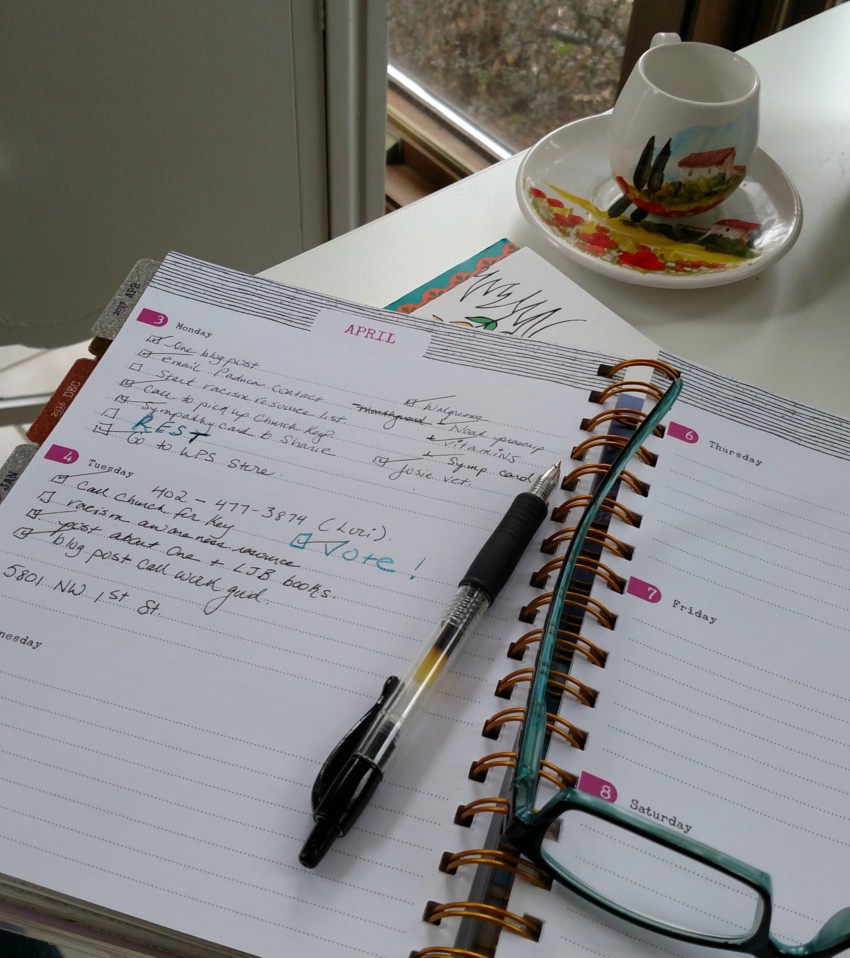 I recently finished up a busy three weeks with back-to-back-to-back weekends of speaking engagements. You should know, speaking is not my sweet spot. Not that I don’t love connecting with women – I do! I love nothing more than sitting face-to-face with another woman to hear her story and share a bit of mine. And strangely, lately, I really don’t even mind the actual speaking part. Once my heart stops slamming around in my chest like a caged lemur, I kind of enjoy speaking a message I feel passionately about to an audience. Sometimes it can even be fun. {Did I just say that?}

But the days and weeks leading up to the speaking engagements? That’s what takes the toll. I hadn’t realized it until this week, but it’s the preparation and practice, combined with the anticipation and anxiety, that make speaking extra hard work for me.

Because speaking doesn’t come naturally to me, I combat fear and insecurity with uber preparation. Honestly, I prepare for a talk for 15 women at a weekend retreat like I’m preparing for a presentation to the U.N. General Assembly. I write out my talk verbatim, and then I practice it over and over again in my kitchen until I nearly have it memorized and can present it naturally. I still have my full written-out talk in a binder on the podium in front of me when I speak, but by that point it’s mostly a safeguard in case of a sudden deer-in-the-headlights paralysis.

All this to say, when I finished up the last of my three talks, I was wrung out. Completely spent. One hundred percent ready for a plate of Oreos and a night of Netflix. And yet, instead of doing exactly that, instead of taking a moment to offer myself a “job well-done” and acknowledge and celebrate the fact that I had completed a hard thing, I catapulted ahead to the next project at hand.

In fact, at one point I caught myself feeling guilty because I “hadn’t done any writing in the last couple of weeks”– forgetting, of course, that I’d written three separate talks totaling more than 13,500 words.

Friends, this is not good. This relentless drive, this hustle to finish one project and quickly move onto the next without hardly taking a breath is not good for our bodies, our minds, or our souls. It’s exhausting  — mentally, physically, and spiritually.

I know this first-hand because the Monday after my third and last speaking engagement, I woke up feeling like I was coming down with something. My head ached, my stomach was unsettled, and I kept reading the same sentence over and over without actually digesting the words. I was distracted, vaguely agitated, and unable to concentrate. It took me four hours to cobble together a blog post, and I was frustrated, when, at the end of the day, my to-do list looked much like it had at 9 a.m. I’d hardly made a dent in it.

I realize now it would have been better — for both my productivity and my body and soul — if I had simply taken the day off, if I had allowed myself a bit of a buffer zone, a bit of space not only to rest and refuel for the next thing, but also simply to celebrate what had already been done.

At the end of each of the six days of creation, God surveyed his work for that day and deemed it good. At the end of the sixth day, after God had made man, “He looked over all he had made, and he saw that it was very good.” (Genesis 1:31). And on the seventh day, after six whole days of work, after God had made the universe, the stars in the sky, the plants on earth and the fish in the sea, he rested from all his work. “God blessed the seventh day and declared it holy, because it was the day when he rested from his work of creation.” (Genesis 2:3)

Do you see what I am getting at here?

I think God did this for a reason. I think God stopped to survey his work and call it good because his desire is that we do the same. God desires that we honor the work we’ve done, the work of creation, by acknowledging it and calling it good. He desires that we appreciate a job well-done before moving on to the next task at hand.

It’s easy to look at our to-do list and criticize ourselves for the items not checked off, the chores or projects still left undone. It’s easy to let what we haven’t accomplished overshadow what we have, to see only what remains to be done, rather than what we’ve finished. But to do that is to do ourselves, and our God, a disservice.

Let’s take the time to do as God did. Before we move on to the next project at hand, let’s stop for a moment to celebrate and see our good work for what it is: work well-done, work that honors God.

Why I Said Yes to a Part-Time Job {or, Let's Talk Real about the Creative Life}
God Doesn't Guarantee Success