* It’s the first week of September…how did that even happen?! My kids have been back in school for three weeks, and I am back into a regular work routine — all the amens! Today’s post is  my column that ran in the Lincoln Journal Star this month, but next Wednesday I hope to back to a regular weekly blog schedule. I’ll have some news for you, plus some thoughts on recovering from a hard season. Thanks for sticking with me during my blogging respite – I missed you!* 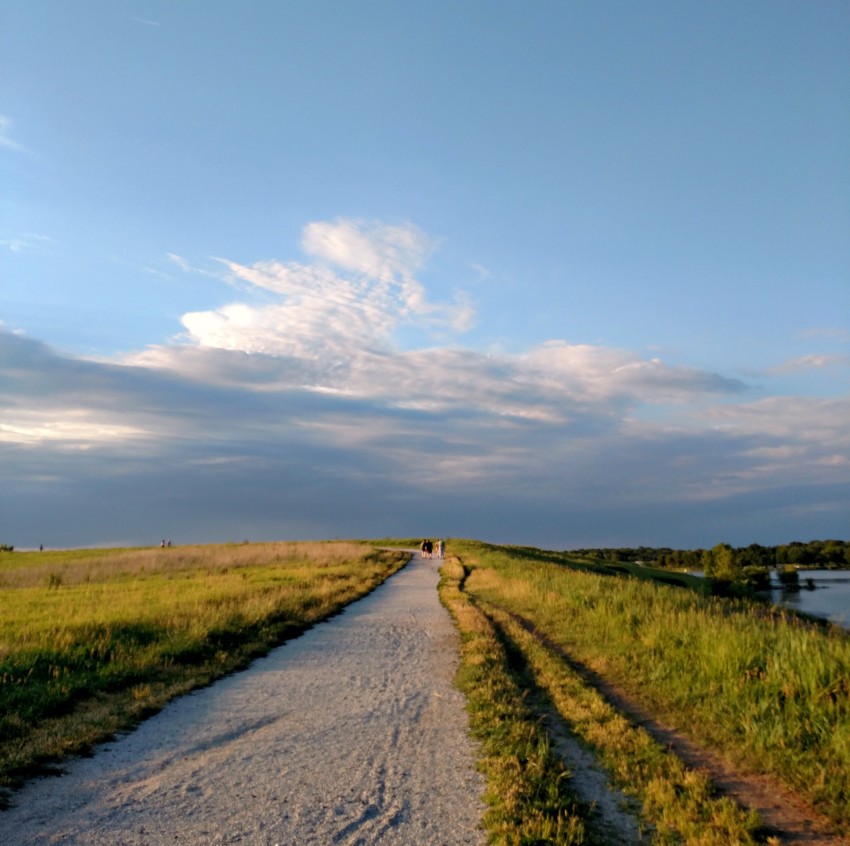 A couple of weeks ago I did something uncharacteristic while I was jogging on the bike path. I stopped to talk to a stranger.

You know the runners who seem like they have springs coiled in the soles of their sneakers? The ones who pass by all chipper and spry? That’s not me. My primary focus when I run is oxygen intake. I typically don’t have the energy to extend much more than a teeth-clenching smile to those I pass by.

This summer, though, I couldn’t help but notice one walker in particular. In fact, it was hard not to notice him, because every time I passed him on the trail – which I did two or three times a week all summer long — he offered an exuberant greeting or a kind word.

Sometimes when he spotted me he complimented the color of my shirt or shorts, which made me laugh, because I don’t wear the snazziest fitness gear you’ve ever seen.

But more often than not, he looked me straight in the eye as we passed each other and called out, “Have a wonderful day!” with more enthusiasm you would ever imagine an older gentleman could muster.

I began to keep an eye out for the man with the paddler’s hat and the peppy greeting. I noticed I had more spring in my step after he greeted me; I began to look forward to seeing him.

This past July my friend Amanda launched a project she called WholeSpirit – 31 days of speaking kindly to strangers, complimenting people just because, and writing encouraging notes. When the 31 days were done, she wrote a recap about it on Facebook, noting how surprisingly difficult and often awkward it was to say real, meaningful things to strangers. “I’m a tall blond woman, so maybe people thought I was trying to sell them real estate,” she quipped.

Despite the inherent discomfort in speaking words of authentic kindness to strangers, though, Amanda noticed that every single person she spoke to reacted positively. “Everyone’s face lit up,” she recalled. “They smiled. They looked genuinely shocked, and they usually responded with a simple ‘thank you.’”

A few days after reading Amanda’s Facebook post about her WholeSpirit project, I saw the cheerful man approaching on the bike trail. Before I could lose my nerve, I plucked out my earbuds and veered onto his side of the path. “I appreciate you so much, and I just want to say thank you for being a bright spot in my mornings,” I gushed breathlessly.

His name is Ted, and Amanda was right, he seemed a bit surprised by my declaration of gratitude (or perhaps he was simply startled by the middle-aged woman who had unceremoniously lumbered sweaty and gasping into his morning reverie). Seconds into our brief conversation, though, Ted’s surprise turned to delight. We introduced ourselves, he thanked me for stopping him, and then, as is his habit, Ted wished me a wonderful day.

“Being kind in our minds may be easy, but are we putting that kindness into the world?” Amanda asked in her Facebook post. “Be overwhelmingly generous with your kindness. It literally costs you nothing, and makes all the difference in this world.”

Ted puts his kind thoughts into his small piece of the world every day, and I, for one, am grateful.