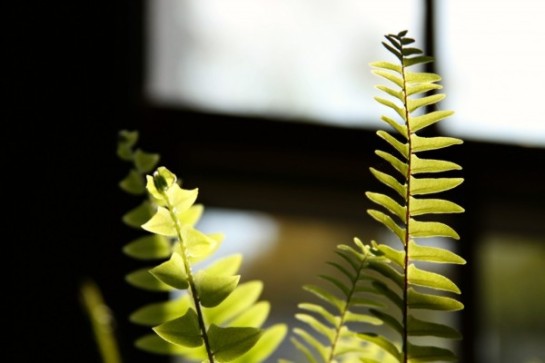 Back when we were dating, Brad entrusted me with his favorite plant, a lush fichus tree named Herman (in honor of Herman Melville, because of course) before he left town for a while.

I moved Herm into my house, positioned him in a sunny spot next to the sliding glass doors and then watched as he began to drop leaves at an alarming rate. I moved him to a south-facing window. More leaves littered the carpet. I watered Herman, fed him plant food, repositioned him yet again in a less chilly spot. Still he dropped leaves.

A week after Brad left, I called him to report that I’d killed Herman in a record-setting seven days flat.

Turns out, fichus trees require stability to thrive — a lesson we would be wise to apply to ourselves as well.

When they first join the order, Benedictine monks and nuns take a vow of stability. “The vow of stability affirms sameness,” says author and Episcopal priest Elizabeth Canham, “a willingness to attend to the present moment, to the reality of this place, these people, as God’s gift to me and the setting where I live out my discipleship.”

To “affirm sameness” is radically counter-cultural in our society. We are conditioned, even encouraged, to drop one thing and move onto the next. Marriage grown stale? Divorce. Bored on the job? Update the resume. Shoes scuffed? Buy a new pair. Acquaintance irritate us on Facebook? Unfriend. We abandon with ease, enticed by the fresh and new.

We are also expected to be as productive as possible, to hustle, push ourselves to the max, and multitask like a boss. The person who resists the rat race is an anomaly and is often seen as weak, an aberration. We wonder what happened to their ambition. A lot of us – dare I say most of us — equate stability with failure, or, at the very least, stagnance.

Yet it’s clear this relentless pursuit of the perfect place, the perfect situation, the perfect job, and the perfect person often leads to the Herman the Fichus phenomenon. We feel restless, uprooted and displaced. We wither rather than thrive. Like Herm the Fichus, we begin to lose pieces of ourselves. We begin fall apart.

Stability as a spiritual habit or discipline can be practiced on both the macro and micro level. For me, practicing stability in the big picture of my life means practicing contentment in my career, my parenting, my marriage, my home and my place.

This does not come naturally to my Type A, driven personality, especially when it comes to my work. I’ve long worn productivity, achievement and success as badges of honor, so seeking contentment and self-worth in the present status quo takes intentionality.

Likewise, on a micro level, practicing the habit of stability means making a concerted effort to stay in one place and do nothing, if only for a few minutes at a time.

Last November I began the practice of sitting on a park bench for five minutes during my daily afternoon dog walks, and I’ve kept up the routine pretty regularly. Josie automatically veers off the path and toward our bench now and patiently waits while I listen to the birds and gaze at the trees. It’s become a habit for both of us, and it’s good for me to simply stay in one place, to let my thoughts settle into a low simmer.

As it turned out, much the same was true for Herm the Fichus: he simply needed to stay in one place. I finally stopped moving him around the house and let him be, convinced he was dead but too guilty to dump him into the trash bin. A few weeks passed, and that’s when I began to notice tiny buds sprouting on bare branches. Leaf by delicate leaf, Herm began to thrive, unfurling and blossoming into a lush, verdant canopy. Left in one spot, he grew strong and whole once again.

A Word about Personality and Habits

In addition to identifying the Four Tendencies, Gretchen Rubin (author of Better Than Before) also identifies several personality aspects (she calls them distinctions) and how they relate to habit formation. For example, she asks whether the reader is a familiarity lover or a novelty lover, a lark or a night owl, an underbuyer or an overbuyer, a marathoner, sprinter or procrastinator, etc.. Identifying which end of the spectrum you lean toward can help you discern which spiritual habits might fit best for you.

Case in point: I am a familiarity lover. I’ve eaten the exact same snack at the exact same time pretty much every day for the last four years. New experiences make me uncomfortable. I’m not adventurous, and my favorite place in the world is my own backyard. So, given what I know about myself, it makes sense that I might gravitate toward the spiritual habit of stability – I’m inclined toward stability anyway. Sitting on the same bench at the same place on my walking route at the same time every day is not a huge stretch for me. It was relatively easy to integrate that new spiritual habit into my everyday routine.

BUT, if you’re a novelty lover — if you gravitate toward new experiences — the thought of sitting on the same bench in the same park at the same time every day might sound like your idea of a ticket straight to crazy town. For novelty lovers, the spiritual habit of stability might be more challenging. Not impossible, but probably more challenging.

If you missed the first two posts in my Spiritual Habits series you can catch up here:

How Our Habits Can Impact Our Spirituality {introduction}

The Spiritual Discipline of Digging Dandelions

Next week: The Spiritual Habit of Scripture Reading