I wrote this post several weeks ago for my church’s e-devotional, and I think it’s providential that it was published this past Tuesday, November 8 – election day. I’m re-reading my own words this week, trying to let them soak into my heart so that I may live by them. It probably goes without saying, loving the person who is different from you or believes differently than you do is a lot easier on paper than it is in real life. 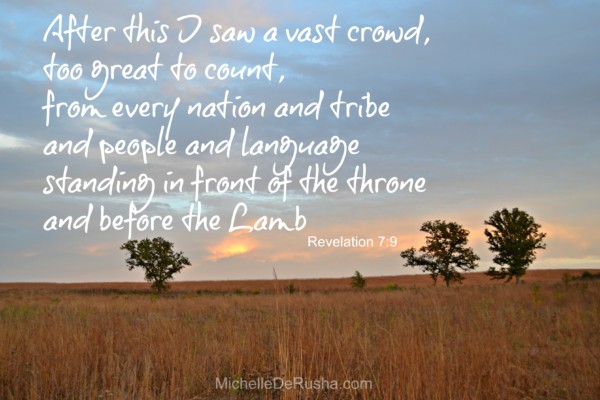 A few years ago my son Rowan came home from school with a question: “Do we believe in the right God or the wrong God?” he asked me.

Turns out, that’s what a friend had asked him at school, and although he admitted to me that he hadn’t really understood the question at the time, Rowan had answered, “The right God.”

Now, though, he wanted to know the difference between the two. “Who is the wrong God and who is the right God?” he asked me.

I’m not sure what Rowan’s friend had meant by his question. Who was the wrong God?

Initially the question made me angry, because I assumed the young boy was making a judgment…or at least repeating a judgment he’d heard from his parents or his pastor.

But the more I thought about it, the more my anger turned to sadness and shame when I realized I, too, have made a distinction between the “right God” and the “wrong God.”

I know from my own experience that it’s tempting to define myself and my beliefs against someone else’s. And when I do that, I naturally consider myself on the “right” side of the fence, and a whole bunch of other people — people who don’t believe what I do or practice faith or religion (or politics) in the way I do — on the wrong side.

When I define myself against someone else, that person becomes “the other,” and I become “better than.”

This is not at all what God intends for us.

When he created humanity, God did not envision division and lines of demarcation. He envisioned us as one – different ethnicities, different nations, different languages, different custom and cultures, yes, but one in grace and love, one as children of God.

John described such unity in the Book of Revelation:

“After this I saw a vast crowd, too great to count, from every nation and tribe and people and language standing in front of the throne and before the Lamb. They were clothed in white robes and held palm branches in their hands. And they were shouting with a great roar, ‘Salvation comes from our God who sits on the throne and from the Lamb!’” (Revelation 7:9-10)

John’s vision is of heaven, but we forget, when we read these verses, that heaven starts here on earth. The vision John described so beautifully begins with each one of us.

Instead of drawing lines in the sand to declare who’s in and who’s out, who’s right and who’s wrong, who gets salvation and who doesn’t, it’s our job to live out God’s vision, which is much broader, wider, deeper and more spacious than we could ever imagine. 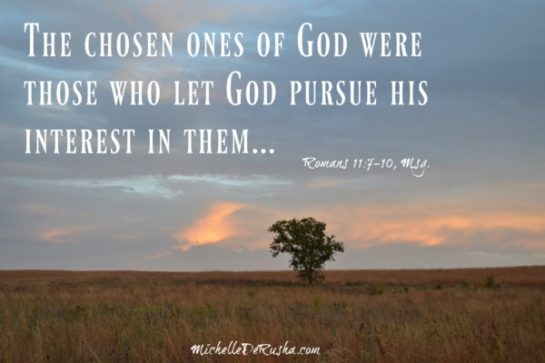 I’ve always struggled with the concept of the “chosen ones” in the Bible. While it makes sense to me in the context of the Old Testament — the Israelites were the chosen ones — the word “chosen” has always made me much more uncomfortable when I get to the New Testament. The notion of predestination — that some are pre-selected by God for salvation — doesn’t sit well with me. And I can’t help but wonder: maybe the reason I struggle so much in my faith is because I am not a chosen one. Maybe I’m a doubter because God didn’t pick me from the get-go. Maybe he simply didn’t choose me.

This verse from Paul’s letter to the Romans, taken from The Message, has opened up a whole new perspective for me, and it all comes down to a single, seemingly unimportant word: let.

It starts with God’s pursuit of us, but it depends on our yes; it all depends on the let. God wants nothing more than to choose us, to invite us into him. He desires nothing more than to pursue each one of us and to be in deep, intimate relationship with us, like the shepherd who risks his entire flock of ninety-nine to pursue the one lost sheep. But he has also given us the free will to decide whether we will let him in or not; whether we will turn our back on him or receive his open embrace.

God does the pursuing. We decide if we will let him in.

God chooses all of us. We decide to be chosen.

So here’s my question for you to ponder this weekend: 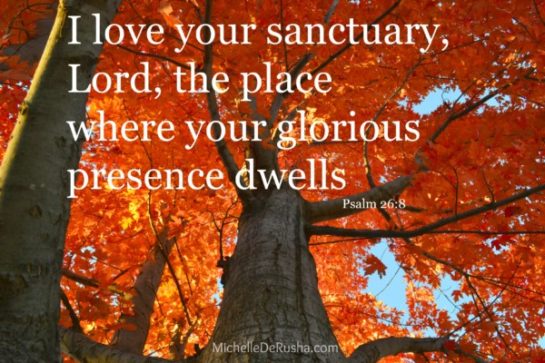 I’ve been thinking a lot about rest lately, and rest — quiet, stillness, solitude — is definitely a place in which God’s presence dwells for me. Rest is a sanctuary.

And yet, God is everywhere, right? He occupies every little nook and cranny, from the most spectacular landscape to the grimiest alley, from the most joyful moments to the most heartbreaking ones.

Which means we can find his sanctuary anywhere as well.

Wherever you are right this very minute as you read these words, you are enveloped by God’s presence; you are resting in his sanctuary.

Close your eyes, just for a second. Take a deep breath and release it. Know and give thanks in your heart that you are always and forever with him. Amen. 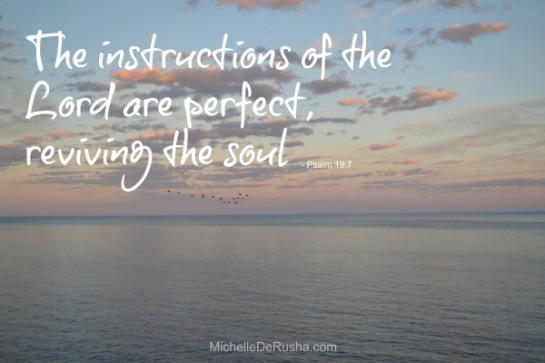 I don’t know if you noticed, but I’d taken a hiatus from the Weekend One Word posts these last few months. Turns out, I kind of missed them. I like to make pretty word-pictures, and focusing on a single word from a single verse each week helps me read Scripture more closely. So…Weekend One Word is back! Most Saturdays I’ll post a verse-picture with a few very brief thoughts. I hope these pictures and posts bring a moment of serenity to your soul.

Based on personal experience, it seems that there is a direct correlation between how well we listen to and heed God’s word and will, and the state of our souls.

When our loyalty is divided between God and the world (James 4:8), we experience unrest in our lives. In trying to appease two masters, we become fragmented and distracted, anxious and weary. We start to hustle for our self-worth; we begin to define our value based on society’s measuring sticks: success, achievement, productivity.

Turns out, God knows what’s best for us; he knows what will bring us rest, security, wholeness, and peace. Only in returning to God and resting in him (Isaiah 30:15) are we able to find our true self, the  unique self created and defined by God, rather than the world.

Only in coming closer to him, in listening and heeding, is our soul replenished and revived.

Some questions for you as you meditate on this verse:

Are there specific instructions from God that you are ignoring right now?

How is your soul, your innermost self, feeling these days? Anxious and weary or at peace? Does your soul need reviving?